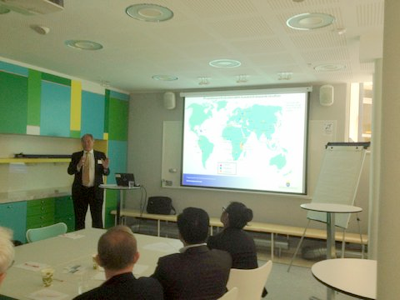 Auditor’s Report on financial statement for the year that ended 31st December 2012 were presented before the members. Anders Haag audited SBBC accounts for the year 2012. The auditor’s report was adopted by the members.

AGM had also appointed Anders Haag, Alestra AB as the Statuatory Auditor of SBBC and Christina af Klint, Svensk Handel, together with Fredrik Fexe, The Swedish Trade & Invest Council were appointed  Nomination Committee for the year 2013/2014.

Ambassador Anders Johnson, Ministry of Foreign Affairs, Sweden, was the guest speaker after the AGM. He spoke about possibilities for small and middle size enterprises in Bangladesh.

He had also expressed his own experiences from his earlier posting as an Ambassador in Dhaka, Bangladesh. The AGM ended in mingling and informal meetings among the participants.

Bo Gunterberg, Base of Trade

See all pictures from the event >>>>