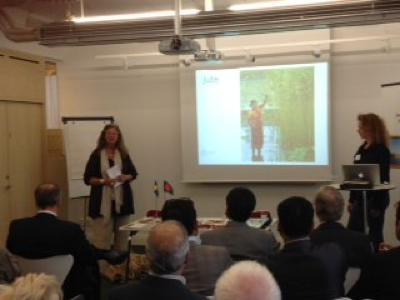 The Sweden Bangladesh Business Council held its 2nd Annual General Meeting on Wednesday, 21st May 2014 at Svensk Handel, Stockholm. SBBC’s chairman of the board Mizanur Khan welcomed and presented the Annual Report for the year 2013, highlighting the events and underlining the achievements of the Council. Anders Haag, auditor of the council presented auditor’s report for the year that ended 31st December 2013.  The auditor’s report was adopted by the members.

Christina Östergren and Josefin Lassbo presented their award winning company Juteborg AB and together with Jonas Brandström they reported from their travels in Bangladesh. The theme of their presentation “How can a 400 year old mistake be part of the future solution” was very interesting. They also expressed their gratitude to SBBC for all help they received in connection with their journey to Bangladesh.

Afterwards there was time for questions and we all learned that the material jute is very versatile. It can be used in so many ways, for instance in construction as part of isolation in houses, as a textile and as a car manufacturing component. You can grow jute on the field together with rice.

SBBC welcomed Johan Frisell, newly appointed Swedish Ambassador in Dhaka. Johan informed us that he will start his new work in Bangladesh this Autumn and he is looking forward to a good relationship with SBBC in the future.

Ambassador H.E. Mr. Md. Golam Sarward, from Bangladesh Embassy updated members on the current political and economic situation in Bangladesh. He also expressed his interest in cooperating with SBBC.

The AGM ended in mingling and informal meetings among the participants.

See all pictures from the event >>>>