H.E. Mr. Mehdi Hasan, Ambassador Extraordinary and Plenipotentiary of Bangladesh to Sweden presented his credentials to the King of Sweden His Majesty Carl XVI Gustaf 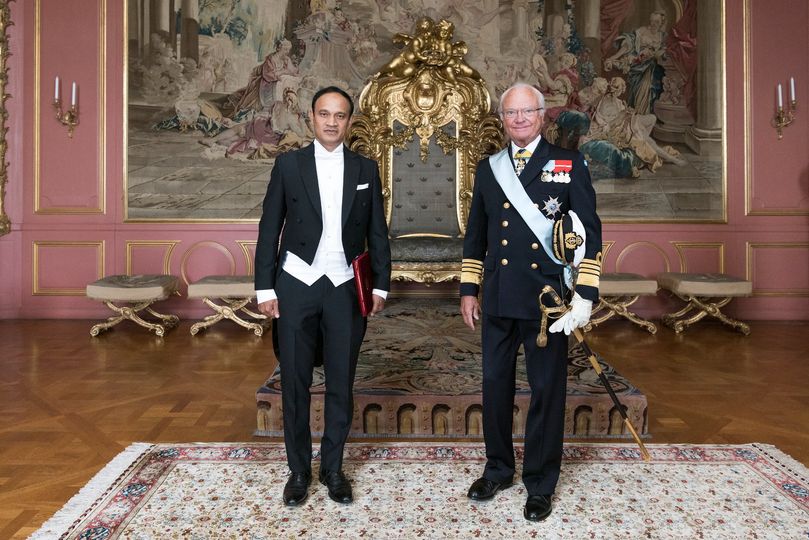 H.E. Mr. Mehdi Hasan, Ambassador Extraordinary and Plenipotentiary of Bangladesh to Sweden presented his credentials to the King of Sweden His Majesty Carl XVI Gustaf at the Royal Palace on 24 August 2022 at 0945 hrs.

The colourful ceremonies of the day began by courtesy meeting and exchange of greetings with the Chief of Protocol, Marshal of the Diplomatic Corps and colleagues of the Department for Asia and the Pacific at the Ministry of Foreign Affairs. Then, the Ambassador was escorted to the Royal Palace by horse drawn couches and received by His Majesty the King for formal audience, where he accepted the Letter of Credence of Mr. Mehdi Hasan as next Bangladesh Ambassador to Sweden.

During the audience, the Swedish King expressed satisfaction over the bilateral relations between the two countries and appreciated the role of the Government in poverty alleviation and socio-economic development of Bangladesh. The ambassador highlighted the priorities of the government of Bangladesh in line with the Vision 2041 of a developed country by that year, Bangladesh Delta Plan 2100 etc. The ambassador also briefed the King about environment and climate change issues, flood and water management, agriculture and fishing sector of Bangladesh, and bilateral trade and investment between these two countries.

The Swedish King himself being a Champion in World Scouting, was happy to know from Bangladesh Ambassador Mr. Mehdi Hasan about the strong Scout Movement in Bangladesh. The Ambassador also briefed the King about the Rohingya issue and requested Sweden to take meaningful measures so that Myanmar authorities take sincere and visible steps to create a conducive environment in Rakhine State ensuring their safe, sustainable and dignified return to their homeland.

The King wished Bangladesh Ambassador a successful tenure in Sweden.