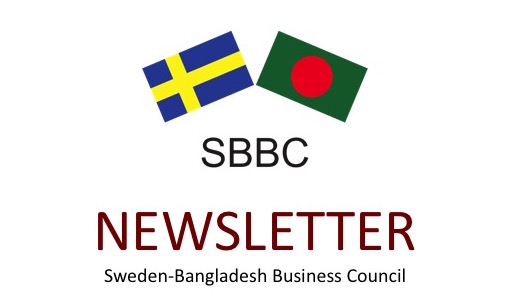 SBBC invites Swedish companies to join our business delegation to  Dhaka. A possibility to visit, learn and explore the SoftExpo ICT-sector in Bangladesh, Feb 6-9, in order to meet with companies that are interested in our projects. Register your participation latest 22 January 2020 via e-mail to mizanurk@gmail.com or info@sbbc.se . Read more>>

Bangladesh ranks 40th among 193 countries this year and will rise to 25th in 2034 on the back of demographic dividend and rising per capita income, according to the World Economic League Table 2020. Read more>>

BIDA has shelled out Tk 2 crore to set up a lounge at the Hazrat Shahjalal International Airport as part of its efforts to woo in foreign investors to boost the country’s historically low investment from abroad. Read more>>>

The Gentium-Damen Consortium Group, a joint venture of Dutch based Damen Group and Australia based Gentium Solutions, is set to construct a new world class #shipyard at Char Nissanbaria and Madhyopara Mouza near the Payra port under Patuakhali district. Read more>>

“Online OSS: Easier, Faster and Transparent Investment Entry in Bangladesh” – BIDA is dedicated to providing an effective and efficient One Stop Service as part of its overall effort to simplify the processes investors must follow to do business in Bangladesh. Read more>>

Here’s what you need to know about Bangladesh’s rocketing economy. Bangladesh now has an average growth rate of 8% – well above the Asian average, Asian Development Bank figures show. Read more>>

Fifth-generation (5G) mobile service and data security are the two major technologies Bangladeshi companies believe will have the greatest impact on businesses in the next five years, according to a recent international survey. Read more>>>

As reported by World Bank, Bangladesh ranked 106th among 157 countries in the Human Capital Index. Sri Lanka topped the list among South Asian countries, with a ranking of 72. The brand name of Bangladeshi humans can be ‘trusted and skilled.’ This can make Bangladesh grow economically and help build a happy society. Read more>>

The Institute of Chartered Secretaries of Bangladesh (ICSB) has awarded 32 companies for their outstanding corporate governance practices as well as transparency and accountability in overall management. The 6th ICSB National Award for Corporate Governance Excellence for 2018. Read more >>>

Bangladesh’s e-commerce market stands at $1.6 billion currently and will double to $3 billion by 2023 on the back of a digital foundation laid down by the government and a young and tech-savvy population, a German research firm said recently. Read more>>

Export of Bangladeshi readymade garments (RMG) has been declining since the past four months. There are reasons to believe that Bangladesh’s weaknesses compared to rival producers in the area of product development and diversification have contributed to this falling trend in garments exports. Read more>>

According to the BIDA figures, the Netherlands last year ranked as Bangladesh’s second-largest foreign investor behind China, with $692 million, while Britain took the third spot with $371 million. Britain was Bangladesh’s biggest foreign investor in 2017, with $313 million. In 2018, the United States, traditionally one of Bangladesh’s biggest investors, ranked fourth with $174 million in direct investments, according to the figures. > (opens in a new tab)”>Read more>>

Become a member? This coucil is only for a Swedish registered company and institute. Apply for your membership online here, www.sbbc.se , e-mail info@sbbc.se. For GDPR, please write a mail to us!