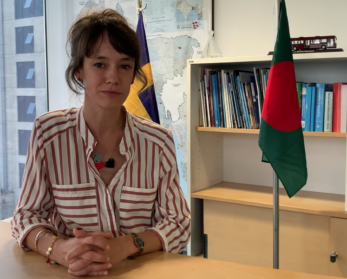 On October 27th SBBC organized an online event in the form of a ‘‘Meet and Greet” with the new Swedish Ambassador to Bangladesh H.E. Ms. Alexandra Berg von Linde.

Mizanur Khan, president of SBBC, welcomed the participants and directed a special welcome to the new Ambassador. He shared some background on SBBC’s history and past activities. Khan also highlighted the common goal of both the SBBC and the Swedish Embassy: expanding trade and investment between the countries and strengthen bilateral relations.

Thereafter the participants presented themselves and their respective companies. A variety of companies from different sectors – including RGM & Textile, IT, ICT & Tech, Healthcare&Pharma, Agriculture, Cleantech&Energy, Water, and Services – were present which reinforced the broad interest that Swedish companies have in the Bangladeshi market.

After being cordially introduced by Mr. Khan, Ambassador  Berg von Linde took the floor. She spoke about the potential that existed for further broadening the bilateral trade relations between the two countries. Sweden was viewed as a forerunner in innovation, sustainability and inclusiveness. Her impression so far was that interest in Swedish products and solutions was strong, as was the trust in their quality and service and the know-how that Swedish companies could bring to Bangladesh. Labour rights and social dialogue in the workplace would remain a strong priority for the Swedish Government, as well as a focus for the Embassy in Dhaka. The Ambassador saw a natural role for Swedish companies in the green recovery of the economy in Bangladesh. The Embassy together with Business Sweden was looking at ways to strengthen the possibilities for Swedish companies seeking to export clean and energy-efficient technologies to Bangladesh. The Ambassador was also looking forward to furthering the dialogue with Bangladeshi authorities when it came to Ease of Doing Business and improving the business climate. The input and experiences of Swedish companies in all these topics were vital in the continued dialogue with Bangladeshi partners.

Finally, Ms. Alexandra expressed the hope of continued close cooperation between the SBBC and the Swedish Embassy, as well as with the broader Team Sweden. She invited Swedish companies already established in Bangladesh to have a continuous dialogue with the Embassy on issues of importance to them and also expressed an interest in a continuous exchange with Swedish companies looking to establish themselves in the country.

The Q&A-session that followed was open, dynamic and interactive. Participants shared their ideas, knowledge and advice with the Ambassador and in between themselves. It was in all an inspiring session.

At the end of the meeting, Mr. Khan thanked the Ambassador and extended his thanks also to the Embassy’s Political, Trade and Promotion section for their continued support and cooperation. Mr. Khan also thanked Nathalie Tranefeldt from Hifab for using their Teams and Inger Wijnbladh for her assistance in organizing the event, as well as the gathered participants that had all contributed to a dynamic and interesting session.